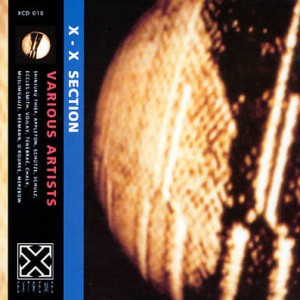 “X-X Section” is more than just a compilation. It is a collection of music by artists already on, and soon to be on, the EXTREME label. These musicians hail from all parts of the globe and are working in many and varied styles of music. The connection with them all is the creation of new and innovative music that people can enjoy listening to.

SHINJUKU THIEF – This group of four musicians, based in Melbourne, Australia, develop a modern tribal music with energy and enthusiasm. They are currently working on their first full-length album, for release on EXTREME, “Bloody Tourist”.

PETER APPLETON – Appleton, from Exeter, U.K., is already well known internationally as a sound sculptor. His musical abilities have been recognised by Brian Eno and Michael Brook, performing with them in Tokyo in 1989. Appleton uses instruments he makes himself, these instruments appearing as sculptural objects and giving him a unique sound. Appleton’s first album for EXTREME, “Songs from the Shed” was released late 1993.

PAUL SCHUTZE – Melbourne musician Schutze already has two releases on Extreme, “Deus Ex Machina” & “The Annihilating Angel”, to his credit. Taking his talent for evocative, rhythmic music, his already successful career as a soundtrack composer, acknowledged by an Australian Film Industry Award in 1986, and his grounding with seminal experimental band LAUGHING HANDS, Schutze is set to release his third album on EXTREME early in 1992.

C-SCHULZ – Schulz, a classically trained oboist from Koln, Germany, is new to the label, having released an L.P. and cassette album previously, he has finished recording his first album for EXTREME. The album “4. Film Ton”, released in 1992, is a filmic narrative carrying the listener on a musical journey using oboe, piano, synthesizer, computer and varied acoustic instruments to create a rich and entrancing soundscape.

IAN ECCLES-SMITH – Eccles-Smith, from Melbourne, has musical abilities that express style and freshness. Producing music for such dynamic films as “Puppenhead”, he is not afraid to use sampling technology with gusto, as an instrument, and his influences are broad ranging, even citing SOUL II SOUL as inspirational. With such eclectic tastes he is currently working on a full-length album.

RICHARD VOJLAY – Vojlay, also from Melbourne, has been in numerous bands in the Melbourne music scene and since completing his musical studies has gone solo to pursue his intriguing style of music. Vojlay uses computers and accompanying instruments in this musical piece.

TENEBRAE – Shane Fahey and Jamie Fielding, both of Sydney, come together to produce a sonically exciting and explosive music. Fahey, previously of THE MAKERS OF THE DEAD TRAVEL FAST, and Fielding have worked on numerous musical projects and played live.

ANDREW CHALK – Chalk, from Hull, U.K, has been active musically since the early eighties, being involved with releases from ORGANUM and with numerous solo albums. Having finished recording “Tahta Tarla” with Giancarlo Toniutti, he is now working on further solo music that has his characteristically honest and organic expression.

MUSLIMGAUZE – Manchester’s MUSLIMGAUZE has been a part of the independent music culture for a decade, creating a very different interpretation of Ethnic and Arabic music, and being very politically motivated in these regions. Having already released “Intifaxa” and “United States of Islam” on EXTREME, there will be a new album, “Zul’m”, in 1992 and a C.D. single, “Bhutto”, in late 1991.

CHRISTOPH HEEMANN – Heemann, from Aachen, Germany, is already well known as a member of H.N.A.S., a band mixing sound collage and voice with that unique German humour. Heemann, having branched out musically with members of THE LEGENDARY PINK DOTS and VOX POPULI!, has developed his own more ambient style for solo projects and is currently working on a project for EXTREME, loosely described as a musical radio play.

JIM O’ROURKE – Chicago musician, Jim O’Rourke, has recently released “Tamper” on EXTREME, an album of shifting and changing form taking a performance of his own musical score and remixing this in the style of French electronic composers. The piece on this compilation is an extension of that and shows his detailed and progressive form. O’Rourke is also well known for his guitar playing and has recorded with such luminaries as Henry Kaiser, Eugene Chadbourne and Eddie Prevost, of AMM.

MERZBOW – Based in Tokyo, Masami Akita of MERZBOW has produced his ‘noise music” for ten years and is still giving the energy and spontaneity that started it all. An abundance of sounds, sometimes cohesive, sometimes chaotic, generate musical moments of power. MERZBOW’s “Collaborative L.P.” and “Music for Bondage Performance”, also on EXTREME, show his overall musical strength.

“X-X Section” is a diverse collection of EXTREME musicians, all creating innovative and exciting music.

X-X Section is more than just a compilation. It is a collection of music by artists already on, and soon to be on, the EXTREME label. These musicians hail from all parts of the globe and are working in many and varied styles of music. The connection with them all is the creation of new and innovative music that people can enjoy listening to.