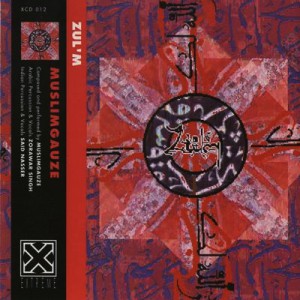 Zul’m is an album of contrasts. It is evocative of a culture caught up in a web of local and global politics. The plight of the Palestinian people continues to inspire the music of MUSLIMGAUZE.

The narrative appears as a slice of urbanity – uptempo, carefree soundscapes of human activity interspersed with digitized spatial rhythms. The boundary between the East and West coalesce, melding and jutting into a changing whole.

MUSLIMGAUZE is from Manchester, forming in the post-industrial early eighties. Their’s is a world music based on western rhythms, integrated with ethnic instruments and atmospheres. The music is a minimal, polyrhythmic soundscape. A vision of unresolved cultural change.

The title “Zul’m” is derived from the name of the Muslim prophet “Zulkifl”, meaning fate.

Engineering and keyboards by Mark Lawrence

Recorded and mixed at DIGITAL PROJECT by MUSLIMGAUZE and Mark Lawrence