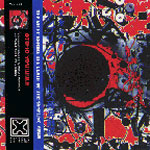 While pacing the dark streets of Tokyo, OTOMO YOSHIHIDE heard voices, disjointed voices, a rush of sounds and then silence, almost sinister. It was THE NIGHT BEFORE THE DEATH OF THE SAMPLING VIRUS!

SAMPLING VIRUS is an experience not unlike being caught in a foreign land with a Walkman Radio that can’t hold the station and even if it did you couldn’t understand. The SAMPLING VIRUS strikes, grabbing the voices of Japan, disorientating and fragmenting as it reveals its host organism.

To play this release in random mode is to allow the SAMPLING VIRUS to regenerate, to mutate with near infinite possibilities.

OTOMO YOHISHIDE’S talent with the turntable has brought him international acclaim, in his own group GROUND ZERO and playing with JOHN ZORN in Tokyo. THE NIGHT BEFORE THE DEATH OF THE SAMPLING VIRUS challenges OTOMO to use a dazzling array of sources, live recording, MD, CD, LP, video etc; the common thread being the voices of the Japanese people.

Notable inclusions in this area are YAMATSUKA EYE and TENKO, both having distinctive vocal abilities. OTOMO is careful in his sampling selection, some voices are left sparingly alone, while others are manipulated into a cacophonous fury, the light and dark. THE NIGHT BEFORE THE DEATH OF THE SAMPLING VIRUS challenges and confronts.

The choice is yours: Will you let the SAMPLING VIRUS live or die?