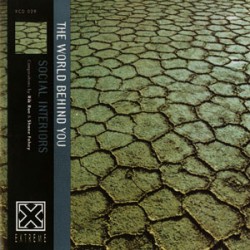 XCD-029 Social Interiors – The World Behind You

“The World Behind You” is the debut release from SOCIAL INTERIORS; a dazzling display of musical adventure.

SOCIAL INTERIORS developed from interjections of local sound commentaries amidst the presentation of FM radio programs from 1984. These shows featured short dialogues and cart cut-ups from media and other sonic networks.

Since then, SOCIAL INTERIORS are sonic thrill seekers using decoyed and doctored sounds from many regional and global sources such as urban and environmental areas; sound grabs and tapes of instrumental passages and text bartered from musicians and vocalists.

Compositions were developed through the use of recording technology. These sound sources were welded with studio tape techniques and then mixed into continuous and abrupt shapes for tape pieces and performances. The result: a surprisingly coherent and sombre soundscape for aural navigation.

SOCIAL INTERIORS includes the talents of RIK RUE, tape manipulator extraordinaire, and SHANE FAHEY, a founding member of seminal group THE MAKERS OF THE DEAD TRAVEL FAST. Guest performers on “The World Behind You” are JIM DENLY, recognised internationally as a leading improviser on bass flute and alto saxophone and JULIAN KNOWLES on sample keyboard.