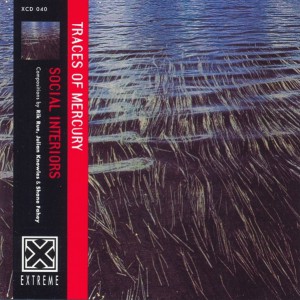 SOCIAL INTERIORS return to the musical frontiers with “Traces Of Mercury”. This, their second release on EXTREME, takes us further and further into the sonic undergrowth that is a pervasive part of their music.

JULIAN KNOWLES has now become an integral part of SOCIAL INTERIORS and accompanies RIK RUE and SHANE FAHEY on their environmental reconnoitre. “Traces Of Mercury” brings three very talented musicians together and each one plies their sonic ingenuity within the constraints and opportunities offered by what could easily be called an Australian super group of sound artists.

“Traces Of Mercury” is a coherent and centred release and shows the development that has transpired since their wilder antics on the release “The World Behind You” (EXTREME, 1995). As the title of this new album implies, each track flows into the next in a subtle shifting of sonic terrain. Bubbling streams meet with exotic voices, creating evocative soundscapes and an embracing ambience.

If “The World Behind You” was the fourth world album of 1995 (TESTCARD, Germany) then “Traces Of Mercury” is the heavy metal album of 1997.