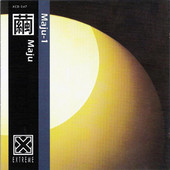 Maju could only come from Japan, a country with an extremely idiosyncratic musical climate and a unique cultural perspective. It is a creation of Hosomi Sakana’s abundant experience and talent and the collaborative involvement of a changing group of musicians.

The music of Maju is both an evolution of techno, drum ‘n’ bass, noise, ambient and other contemporary music genres and a response to the anticipation of the emergence of the next, new music for those on the dance floor and in the living room. “Maju-1” has the potential to give yet another great turn in the ever-changing world of music.

Hosomi Sakana, the core of Maju, has a unique musical presence. His talent as a keyboardist is recognized throughout Japan, having participated on over two hundred albums. Sakana is also acknowledged as a leading producer, with such top ten successes as Elephant Kashimashi.

Sakana seeks to express spirituality in the music he creates. “I want to combine the electronic and the organic, to produce music that is evocative.”

The Japanese word “maju”, pronounced “may-you”, refers to the shell (cocoon) that surrounds and protects the chrysalis. In Japan, it is a word that is treated with respect and has a noble image, and carries a nuance of anticipation of the coming of something transcendental as well.

The music woven by Maju is truly fitting and expressive of this name.

arpg. further beyond the membrane 3′ 52″

Recorded and Mixed at Studio Nekojirushigyunyu,Tokyo

Poems translated into English by fin