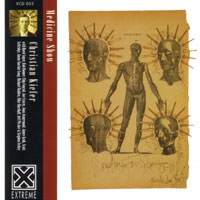 Christian Kiefer has already established himself as a songwriter and composer of exciting originality. With the release of his newest album, “Medicine Show”, Kiefer makes his claim as a talented singer-songwriter with a unique voice.

Further acknowledgement of his position as a major emerging talent lay in the appearance of numerous guest musicians of international acclaim. Ground-breaking “newgrass” instrumentalists (and alumni of the David Grisman Quintet) Darol Anger (electric violin) and Mike Marshall (mandocello) add jaw dropping instrumental skill to the project, as does current David Grisman side-man Joe Craven (whose previous sessions included work with Tom Waits and Jerry Garcia). Fresh from her departure from the Kronos Quartet comes Joan Jeanrenaud, who performs an emotional cello backing to the album’s opening track “Come Up.” Jason Sinclair Long of Blue Man Group runs the drum stool and alternative country legend Stephen Yerkey (of Nonfiction and Chuck Prophet) rounds out the line-up, acting as the album’s demented narrator.

Less experimental than his previous releases, Kiefer’s work here is nonetheless strikingly original. The artist was in control of every part of the process, acting as composer, arranger, and producer of the project in order to craft a final album that is a clear fulfillment of his own singular vision.

Unlike many musicians working today, Kiefer centers his work firmly in narrative and thematic forms. This was true of his first full-length release, 1999’s Welcome to Hard Times, a musical project centered on revising the traditional vision of the American West.

For Medicine Show, Kiefer turned to a more personal tale. The story of a man who has fallen from grace and who turns back, ever so slowly, towards some manner of hope, the album is a beautifully moving testament to the power of human will. The album is organized in four chapters, each being “introduced” by a medicine show hawker, who screams out his list of modern maladies (which includes everything from AIDS and cancer to “literary trilogies” and “homemade toys”).