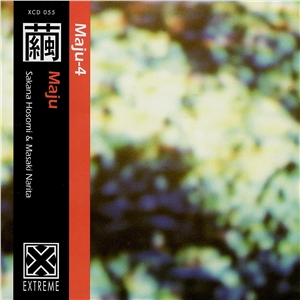 Maju-4 embodies a deep organic interaction that is almost retro-ambient in its approach, carving out a psychotropic quasi-analogue adventure that engages the subconscious and unconscious with compelling clarity.

Maju-4 is now, more than ever, Sakana and Narita. Their distinct voice as Maju has now matured into a force that few can follow. They have allowed the ghost in the machine to speak and its voice is powerful and pure.

Maju-4 doesn’t provide any excuses, instead it launches into the deep cocoon like sound that they have only toyed with on previous releases. This is a celebration of a united musical vision that does not need to or want to compromise.

Hosomi Sakana, having left the stardom of Elephant Kashimashi, has quite rightly never been prepared to compromise. Elephant Kashimashi was a band that achieved legendary status by becoming successful for making music they believed in and, by its own accord, allowing it to connect with the hearts of Japanese people of all ages. This was no small effort, in light of the flood of J-Pop and saccharine music that pervades the Japanese music industry. He currently works with Akino Arai, famous for singing theme songs for major anime productions such as Outlaw Star, Noir, Macross Plus and Dragon Quest.

Masaki Narita is also behind the workings of many Japanese musicians with his production and musical talents. To have two such talented and visionary musicians creating music together is a blessing and a joy to behold.

Maju-4 is like a stream of consciousness and it never asks for approval or offers excuses. If Carl Jung had made music, it would have sounded like Maju.