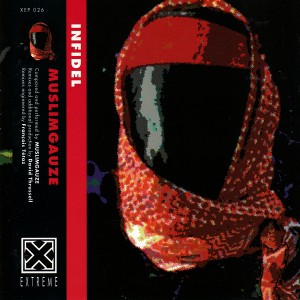 “Infidel”, where Arabic ambience meets techno-industrial, is the latest release from Manchester based group, MUSLIMGAUZE. Many a DJ has asked for a true club mix of the music of MUSLIMGAUZE, with the more adventurous already having found the infectious grooves a great cut on the dance floor.

David Thrussell, of SNOG and SOMA, lends his talents to this release, remixing and adding his production skills to three tracks on the e.p. Thrussell was the perfect choice for bringing the music of MUSLIMGAUZE to the dance floor, with his remixes maintaining the identity of the original music.

Five of the eight tracks are remixes of “Infidel”, a track from the “Citadel” album by MUSLIMGAUZE on EXTREME, and the remaining three tracks are new and previously unreleased. The “veil of peace” mix could fit in well with the current trend for tribal dance music with the “orbesque” mix being a more suited to the chill-out rooms. The “east meets west” mix segues a mix by MUSLIMGAUZE with a mix by David Thrussell and both the “arabesque” and “filmesque” mix being indicative of the style of music that has been the trademark of MUSLIMGAUZE.

The “Infidel” e.p. also brings back the meaning of extended play, with eight tracks and 68 minutes of music. It also gives an insight into the other musical styles by MUSLIMGAUZE on EXTREME. “Infidel” will also be available as a 12″ single.

All tracks digitally mastered by David Thrussell and Rick O’Neil at APOCALYPSE.