Ether hail from Salt Lake City, a fascinating place where polygamy, socialism and separatism happily coexist. Brigham Young has added to the anomalies of this city by developing a non-latin alphabet in which several books and the local currency were printed.

Salt Lake City is also host to a thriving contemporary culture. Many non-Mormons are admittedly self-conscious of the city’s history but this ensures that SLC is a place where anything can happen and the unusual can emerge in stark contrast to expectations.

The formation of ether in 1994 is certainly a case in point. The group has unashamedly partaken of caffeine and alcohol in developing their sound and taking their music to audiences across USA. Rumor also has it that the members of ether do not go to church.

It is strangely appropriate that ether was named after a rash of incidences in which Mormon missionaries were discovered to have been buggering their unwitting companions after anesthetizing them with ether. Measures were taken to stop those using the ‘ether method’ but reports of the occurrence continue.

Ether released their debut CD CODYJUDY on Pinworm Recordings in 1996 and their second CD, HUSH, in 1998. Pinworm is ether’s own label and was started so that ether recordings could be available at concerts and to fan’s outside of Utah. The third album MUSIC FOR AIR RAIDS is released on Extreme.

Fortunately none of ether’s members have ever played in Sepultura or the Glenn Branca Orchestra. In fact, with the exception of Morrison and Fogg, ether has been the only substantive band these talented musicians have been involved in. (Morrison has played in Gowan Ring and Fogg played with Alan Sparhawk of Low). This only adds to the unique sound that emanates from a group that dares to break musical and cultural taboos. The resurrection of rock music is upon us! 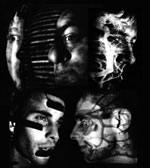