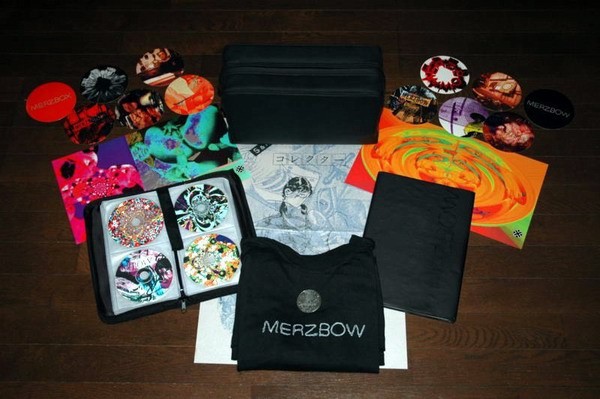 Fifty CDs providing as many hours of MERZBOW Noise music. The collection spans from 1979 to 1997, 18 years of sonic decomposition. Many of the titles were only available as cassettes and have long since been deleted. Five LPs and a CD, which were originally released in limited numbers and have since been deleted, are now reissued in the MERZBOX. Also included are 20 releases that have previously never been released. All CDs have four colour CD labels, featuring new MERZBOW artwork. All CDs are exclusive to the MERZBOX.

Music author Brett Woodward has written the biography of MERZBOW and how Masami Akita came to do what he does and why he continues to explore the realms of Noise music with such vigour. Various musicians and devotees of MERZBOW, Achim Wollscheid, Jim O’Rourke and Damion Romero, have written about their favourite noise musician. Techno-theorist Eugene Thacker provides a text on the relationship between MERZBOW and eroticism. Jonathan Walker contributes to the book with a written piece once included with the “Collaborative LP”. Each album in the MERZBOX is reviewed by writer Brett Woodward and Masami Akita provides explanatory liner notes. All of this in a full colour book with over 100 pages and illustrations.

A T-shirt featuring the artwork that MERZBOW has become infamous for. The black T-shirt is large, long sleeve and made from 100% cotton.

A series of postcards that capture the mail art aesthetic that was critical to the early years of MERZBOW.

A large gloss poster that gives meaning to the term “lowest arts”.

A custom designed hand made box to house all of the collection. It is complete with a photo etched metal name plate on the spine of the box.