Composer, bass player and vocalist Kato Hideki has lived in New York since 1992. Besides playing and recording with some of the best musicians in the New York music scene, he has focused on his own work. In 1994 he released the cd “Karada wa Oto o Dasu Mono” with his own group, Bass Army, and did a solo tour of Europe.

Kato intersperses composition and improvisation, integrating acoustic and electric bass with language, analog and digital processed sounds. The result is an interaction between prepared material and organic chance. His pieces resemble the unpredictability of life itself: alternating between intent and impulse, order and chaos, silence and sound.

His work with other artists include the recently completed “Death Ambient” with Ikue Mori and Fred Frith; a CD-ROM “Headless Beast” with Keitaro Terasaki; and composing the music for the Irondale Ensemble production of August Strindberg’s “Ghost Sonata.”

He was selected for 1993 Artist-in-residence program at Harvestworks in New York. In 1992 he was a co-recipient of a grant from the Australia Council, and participated in a tour of Australia and Japan with the group Peril.

Terasaki Keitaro (piano) – Composer. studied composition with Gyorgy Ligeti. Worked at Pierre Boulez’s Ircam. His compositions have been performed in Europe and Canada.

Co-producer of the CD-ROM “Headless Beast”

John Zorn (piano) – Composer and saxophone player. Founder of Naked City, Pain Killer, Masada, etc. On this CD he played piano, which was his first instrument.

“The idea behind this cd was to create pieces of music like photographs. I took musical “pictures” of myself and the musicians. I specified “roles” for each piece; some were improvisations, some scored, sometimes I just suggested a “mood” or emotion. I took all of these “pictures” and arranged them into vignettes. I used a digital editing system to create the pieces; none of the musicians actually played together. Although they seem to be playing together, some of them have never even met.” — Kato Hideki 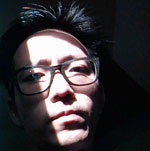