For Rik Rue, environmental sounds have always provided abstract and subconscious pleasure and an inner understanding of the physical. Since the early 1980’s, he has been involved in composing with environmental and found sounds.

Utilising analogue and digital technology in a variety of recording techniques through a wide range of natural settings from Bushland to urban areas, he transforms these recordings into soundscapes that have eventuated into radiophonic works, sound installation compositions and live performances.

Rue’s music is also on solo CD and collaborative tape and CD releases, dance and film sound tracks and other multi-media productions. His solo and collaborative works have been broadcast and performed throughout Australia, Europe, Japan and U.S.A.

Rik Rue also uses ‘live tape’ and digital manipulations in various performance projects with Jon Rose, MIND/BODY/SPLIT, SOCIAL INTERIORS and as a member of the contemporary Australian music group, MACHINE FOR MAKING SENSE, where he uses sampling and the recording medium itself as an instrument.

Rik Rue has two releases as SOCIAL INTERIORS: “The World Behind You” and “Traces of Mercury”. Rue’s other releases include “Voice-Capades” and “Ocean Flows”, both solo, and “On Second Thoughts” and “Talk is Cheap” with MACHINE FOR MAKING SENSE.

“With dangerous irony and subversive skill, he constructs hyper-rash collision collages from appropriated noises, marauding through, salvaging and juxtaposing the hysterical excesses of a panic culture’s electronic mass media and impacting them into frenzied, hilarious moments of magnetic sound particles!!” — A.M.C., Contemporary Edition. 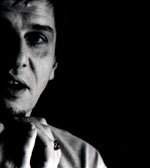