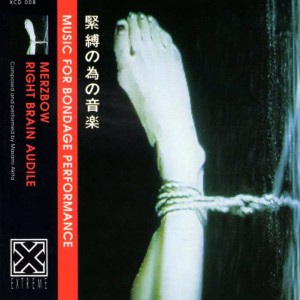 MERZBOW is Japan’s premier noise group. Since 1981, MERZBOW, under the direction of Masami Akita, have pursued the sonic quest for power. In addition to this, Akita has also been documenting, in numerous books and articles, the history and current status of bondage in Japan.

Music for Bondage Performance brings together all of the elements of Akita’s involvement with music and performance. His association with RIGHT BRAIN caused him to form RIGHT BRAIN AUDILE, the sonic counterpart to the RIGHT BRAIN videos. This has opened another dimension to the music of MERZBOW, being more subtle in its aural expression of the visual imagery presented by the performance.

Bondage in Japan, in fact bondage per se, is a much misunderstood art form. It has been a part of the Japanese culture for many centuries. The beauty and nuances, indeed the contrast with the western perception of beauty, that are inherent in the act are often overlooked by the general populace and sensationalised to be brutal, violent or pornographic.

Music for Bondage Performance is the most complete presentation of the music and visual forms of Japan’s MERZBOW. Prepared over a number of years, it brings an insight into a culture not often understood yet discussed and often much maligned. It is hoped that knowledge brings understanding.