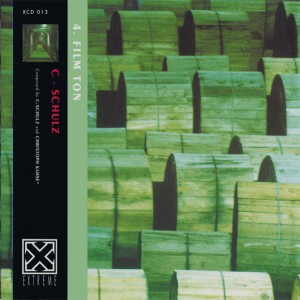 4. Film Ton has a filmic quality that creates vivid images of mystery and intrigue. Unlike most sound tracks which rely heavily on the visuals, the music by C-SCHULZ creates its own narrative which carries the listener on an enthralling journey. “Pforte”, the reworking of “Il Portiere di Notte”, (The Night Porter), a song written by Danielle Paris as the theme for the film directed by Liliana Cavani, is a highlight of this evocative album.

C-SCHULZ is a classically trained oboeist who has branched into electronic instruments in the tradition of the renowned German artists of the 60’s, namely CAN, CLUSTER, NEU and STOCKHAUSEN. CHRISTOPH KAHSE is a pianist of mutual ability and intent who has worked previously with C-SCHULZ on other singles projects. “4. Film Ton” represents a major collaboration in composition and musical ideas to achieve a seamless

The ability of “4. Film Ton” to draw the listener inside the music is a rare event, unfolding on many levels with repeated listenings. “4. Film Ton” is a seductive and imaginative experience.

Except *, based on “Il Portiere Di Notte” (The Night Porter), Written by Danielle Paris, Published by C.A.M. S.R.I. Italia.

I would like to thank all of the people who have encouraged me: The musicians, Frank Dommert, Nina Hein, Roger Richards, and the nice people from C.U. Later-Studios, Koln.