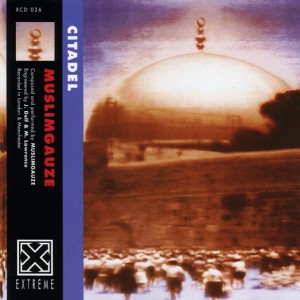 “Citadel” is the fourth album release on Extreme by this enigmatic Manchester based group. For over 10 years, MUSLIMGAUZE have defined their style as a western re-contextualisation of traditional Middle Eastern music enhanced by technology to form a post-modern mix of music, politics and culture.

MUSLIMGAUZE construct the music through ethnic instruments that are a frame for dark and sometimes foreboding aural tapestries that capture the essence and mood of the music of the Middle East and the plight of the Palestinian people.

“Citadel” is an album of exotic Arabic textures where traditional instruments intermesh with technology, found sounds and voices meld with drones and synthesizers. The album uses both eastern and western rhythmic patterns embedded in the layers of shifting soundscapes.

The title track “Citadel” is highlighted with incessant tablas piercing through swirling cymbals and a haunting melody. “Dharam Hinduja” has staccato percussion moving to fill the space between pulsing inverted samples, and “Opel” builds slowly with drones, only to be overpowered by machine-gun rhythms. “Masawi Wife & Child” has a subdued rhythmic undercurrent while “Infidel” stands out with its strident percussion fusing with a myriad of sounds. “Shouf Balek” incorporates traditional strings that interplay with rhythm and voice, and “Beit Nuba” with mesmerising chants weaving between a persistent drum beat. It all draws to a close with “Ferdowsi” where percussive improvisations rise and fall through a minimal soundscape.

MUSLIMGAUZE produces raga music for the technological post-cyber age by shifting cultures out of ancient history into the current day, transcending those traditional forms. “Citadel” has a voice of what is now and perhaps what is to come. In these troubled political times, peace through people unified in harmony while maintaining their own strength and cultural identity is a vision to strive towards.

Tracks 1-6 & 8 recorded and mixed by MUSLIMGAUZE at THE CUTTING ROOMS, Manchester. Engineered by J. Delf.

All tracks digitally mastered by David Thrussell and Rick O’Neil at APOCALYPSE.