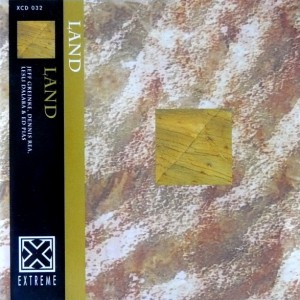 Jeff Greinke, composer and founder of LAND, has always been recognised for his unique ability to layer and texture ambient soundscapes. Inherent in his music is the highly developed way he uses the studio as an instrument.

His direction with LAND, however, was to push this layering technique using a four piece band, although texture continues to be a focus. More attention is paid to melodic construction, musical themes and rhythm.

Joining Greinke (synthesizer, sampler) is Lesli Dalaba (trumpet), Dennis Rea (guitar) and Ed Pias (drums, percussion) who infuse their wide ranging sensibilities in such a way as to create a varied, dynamic, yet cohesive music.

LAND refuses to be pigeonholed. Elements of jazz, ethnic, dance and ambient music are all evident, as well as the Fourth World sound of Jon Hassell. But it’s Greinke’s own personal vision which makes the music unique. His previous release, “Big Weather”, is an obvious departing point.

LAND is also very much a live band. Their album is essentially a live recording with studio enhancement. Hence, their music succeeds equally as well on stage as it does on CD.

All music composed, produced and mixed by Jeff Greinke, except “”Shu”” composed by Rea/Greinke, and “”Jacks”” mixed by Greinke/Haire.