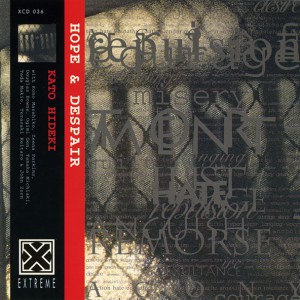 The original inspiration behind “Hope & Despair” by KATO HIDEKI was black & white photography. KATO explains this: “Physically photos don’t have time in terms of actual movement. But I feel good pictures have a sense of time, even though they don’t move like films. While you are looking at the pictures, they have their own lives. I believe this is the beauty of photography.” The title came from a quote by the photographer Robert Frank, who said, “Black and white is the vision of hope and despair.”

Further inspiration came from the concept of time in music from the Eastern cultures. KATO chose to utilize the form of Japanese Noh theater for “Hope & Despair”. Noh has a particular structure consisting of Jo (introduction), Ha (break) and Kyu (fast). In the beginning, the action moves very slowly. It is said, “one step is a thousand miles.” Then comes a sudden movement, completely out of context with the introduction. Next, all of the action occurs very quickly, and finally, the piece ends abruptly.

KATO explains how this came to be a part of “Hope & Despair” : “I have been influenced by this culture, and so I abstractly imported this concept into my music. Indeed it is demanding for an audience to pay such close attention, to watch what is happening during every single second of the performance. But when you do so, you can actually feel the expansion of time. The more attention you pay, the greater the impression.”

“Black and white is the vision of hope & despair” — Robert Frank

Mixed by Kato Hideki at Speed Of Sound

Composed by Kato Hideki (BMI) & all the musicians