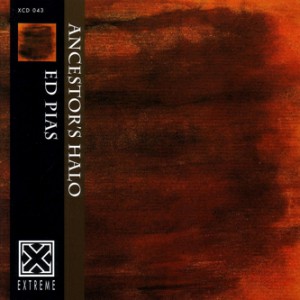 When David Hykes, Founder and Master of Harmonic Chant, heard “Ancestor’s Halo” he immediately asked Ed Pias to accompany him on tour playing frame drums and pakhawaj. Ed Pias, one of Seattle’s finest drummer/percussionists and previously in Land(XCD-032) with Jeff Greinke, was of course delighted to accompany Hykes.

“Ancestor’s Halo” is a solo exploration of percussion and drone, combining such instruments as frame drums, tar, riq, kanjira, tambourines, cymbals, Burmese gong, pakhawaj, tabla, drum set, voice, ankle rattles, shakers, jaw harps and ocarina. It is an album that acknowledges the rightful heritage of the instruments and the cultural awareness that can arise from the creation of music.

“I believe when we study and use music from different cultures as a vehicle for our own self expression, we benefit from exploring the whole of those forms and cultures, not just borrowing what attracts us without compassion,” states Ed Pias.

Ed Pias earned a Doctorate of Musical Arts in percussion/ethnomusicology at the University of Washington, but first gained acknowledgment as a student at the California Institute of the Arts where his teachers included pakhawaj master Taranath Rao, frame drummer John Bergamo, and jazz bassist Charlie Haden.

Pias was soon to see percussion as color, texture and melody as well as rhythm, and began uniting his world music influences with his improvisational skills as an accompanist for artists as diverse as Julius Hemphill and John Cage. Pias’ studies did not end with the gaining of a doctorate. He is proud to currently be one of the only American students of pakhawaj great Mohan Shyam Sharma.

Pias’ studies were not limited to the instruments themselves and understanding the cultures of this spiritual music captured his imagination and influenced his own compositions and performance using the pakhawaj, frame drums and hand percussion. He has devoted himself to combining a thorough historical knowledge with the singular, texturally interactive qualities that these instruments have to offer.

Ed Pias explains, “When we let down the walls and allow the whole of the music to teach us about its own past, then we can connect life, nature and those things which we cannot see or touch, but only feel, to our own musical future. At that point we may begin to approach the threshold of silence. Beyond that threshold of silence exists the Ancestor’s Halo.”

It is Ed Pias’ talent and background that makes Ancestor’s Halo such a significant and rewarding release. Ancestor’s Halo is intended to be listened to as a continuous piece, hence the untitled tracks, but may also be enjoyed in parts with the percussive elements identifying the various songs.

Composed and performed by Ed Pias.