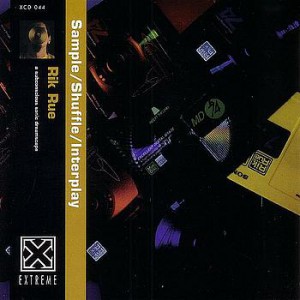 A deft ear, a sharp wit and a myriad of mini-discs scattered across the studio. It’s within this environment of organised chaos that Rik Rue creates the collarges (sic) of “Sample/Shuffle/Interplay”.

Rik Rue has a long-standing musical career, starting over 20 years ago as a jazz saxophonist. The 1970s also introduced Rue to improvised music and his fascination with the possibilities of analog tape manipulation. When the mini-disc was launched in the 1990s it was as though it had been designed with Rue’s musical demands in mind.

Rue has well and truly moved on from his early days of tape manipulation to embrace a technology that provides flexibility and rapid access to sounds and voices that have been collated over a lifetime. More importantly, Rue is not in awe of the medium. It is just a tool in the process of making some of the most interesting musique concrete to be heard today.

Rue’s focus is on creating multi-dimensional music that triggers memory and juxtaposes the obscure with the mainstream. Everyday life is observed and distorted to provide the humour that is integral to his music. The cohesive outpouring of sound disguises the meticulous attention to detail that is inherent with Rue’s music.

“Sample/Shuffle/Interplay” is music designed for the channel surfing/sound bite era we live in. It has also given the mini-disc another lease of life.

14. Standing For Nothing/Falling For Everything 2′ 42″

All tracks composed/constructed/collarged and edited by Rik Rue

in various locations in Berlin, Sydney and Amsterdam from 1995-1997.

Thanks to the Steim Foundation, Amsterdam, Holland.

With special thanks to Julian Knowles