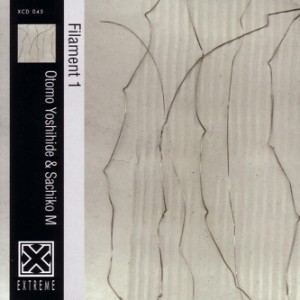 When Otomo Yoshihide decided to start afresh since the demise of Ground-Zero, he realised that he had to take a great risk to find a new musical voice. ‘Filament 1’ is such a groundbreaking piece of work that it even challenges the definition of music.

Otomo and Sachiko M have managed to deconstruct electronic music to its very, albeit fragmented, essence. The music is left raw and unforgiving, with all adornment stripped away.

“We thought of the basic concept and composition together. We still don’t know what Filament is but it is something from us,” puts forward Otomo.

Otomo has a precedent for landmark releases on Extreme. ‘The Night Before the Death of the Sampling Virus’, with its inspired view of sampling and Japanese voice, has had many imitators.

The similarities in the two projects are that Otomo has managed to distance himself from the need to create anything overtly musical.

‘Filament 1’ is the first in a series of works that explored electronic music. With this release, Yoshihide and Sachiko have proven themselves worthy explorers.

Composed and produced by Sachiko M and Otomo Yoshihide / Filament

Recorded by Kose Naoaki, Sachiko M and Otomo Yoshihide at