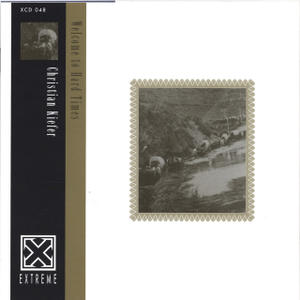 Welcome to Hard Times has not only provided the definitive version of “Home on the Range”; it has also conjured up a stirringly real vision of the American West. Christian Kiefer has accomplished what many John Wayne films only hint at.

Kiefer takes his prompts from recent historians such as Richard White, Donald Worster, and Patricia Limerick. Kiefer’s work captures a darker, more malevolent point of view, with fleeting glimpses of retribution. His title is derived from E.L. Doctorow’s novel of the same name, and Doctorow’s influence is especially noticeable in the spoken-word track, “Giants.”

The recording of Welcome to Hard Times was accomplished over a year in a private studio in the gold rush town of Auburn, California. While the project was recorded entirely into digital format to preserve sound quality, the concept required that as many acoustic instruments be employed as possible. The completed work features Kiefer on several different guitars (including National and Martin), banjo, kazoo, harmonica, and dulcimer, in addition to vocals. Michael Madden, the project engineer, laid down additional banjo and piano work, as well as occasional backup vocals.

The percussion on the album was intended to veer away from the traditional rock and folk music drum kit, relying instead on a series of non-traditional percussion instruments. A three foot circular sawblade was beat and scraped with a tractor wrench during one session. Another featured Kiefer on doumbek and Moroccan finger drums, another, a series of African shakers and another an office chair and a tin of salt.

This use of non-traditional percussion instruments coupled with a sense of experimentation serves to create a compelling and contained work. There are moments which sound like Woody Guthrie (“The Highwayman’s Song”) and others which are more akin to the Kronos Quartet (“Frontier 2”).

Always circling, always changing, Welcome to Hard Times is a unique vision of American music, and a unique retelling of the story of the West.

All tracks and noises by Christian Kiefer except where noted

Images used by permission of National Archives and Records