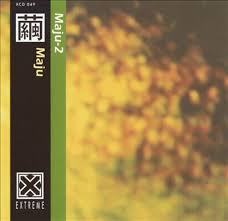 The melodious charm of Maju-2 also signifies a greater maturity to the sound of Maju. Sakana Hosomi continues to lead Maju into a musical realm that involves the listener on many levels.

Maju-2 displays the poetic form that made the debut album from this Japanese group so special. Voice, guitars, percussion and samplers meld into one, with contributions from many talented Tokyo musicians.

Analog synthesis creates an intriguing soundscape through which the melody identifies the abstract songs. This inherent structure allows evocative sounds to weave in and out. Spoken word is present as much for its content as its sonic richness.

The music of Maju-2 creates the cocoon-like sound that is already the signature for Maju. The critical and audience acclaim for Maju has been universally positive with the first album described as:

“A zen-garden of sounds” (ROLLING STONE)

“The best and most convincing ambient album in recent times” (TERZ)

And as John Keats said, “A thing of beauty is a joy forever”.

yawning in an afternoon’s monotony 5’44”

fading is the presence of the woman 4’53”

once again, I revert to that perspective 6’00”

as I turn around, a movement catches the corner of my eye 3’38”

drifts the scent, outside the frame 4’39”