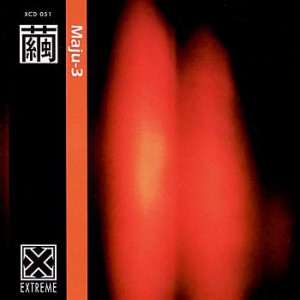 With their third album, Maju has evolved into a crystalline form that provides a complete understanding of what they want to achieve. Their music has successfully emerged from the soup that is always a part of creation. This holds to the truism that any group’s third album is a defining moment.

Many have described Maju as sounding like their contemporaries such as Mouse on Mars and Oval. With Maju-3 they have matured and now fully display the unique qualities that make their first two albums so engaging.

Maju’s pivotal members, Sakana and Narita, are both actively involved in making the music that is a part of Tokyo life. Their production and musical talents can be heard in advertisements, in films and on the albums of J-Pop stars. Sakana and Narita also created the music on the psychedelic DVD release by acclaimed director Haruhiko Shono. The other musicians who contribute to Maju make the music even more distinctly a voice of contemporary Japan.

As with life in Tokyo, there is always something new to discover in the music of Maju. The third chapter in their story is the most rewarding so far and there are surely many more instalments to follow.