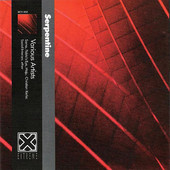 In the year of the snake, Serpentine arrives; a collection of music from new and current artists on Extreme. The tracks are both previously unreleased and from albums already available.

This album is a statement about the music of Extreme and how, as a label, it continues to seek out the new and innovative music of the world, with Maju, Kiefer and Ether. It is also a sign of the continuing support Extreme has for artists such as Soma, Social Interiors and Pablo’s Eye.

Extreme has always been a label hard to define in its musical style and this continues. Roger Richards, director of Extreme explains this simply in the statement; “The voice of the artist takes many forms”.

From the melodious ambience of Maju to the roaring percussive rock music of Ether, it is always music that slips between the cracks of the mainstream that appears on Extreme. Soma deliver their filmic dub noir and Pablo’s Eye charm with their beautiful eloquence. Social Interiors provide an otherworldly soundscape and the folk western songs of Christian Kiefer are further testament to the challenging diversity of the label.

So let Serpentine take you on a journey of discovery of the music of Extreme. It’s an intriguing experience.

Written and performed by Sakana Hosomi. From the album “Maju-1″ (XCD-047)

Written and performed by Sakana Hosomi & Hikaru Sekine. From the album “Maju-2″ (XCD-049)

Written, performed, and produced by Christian Keifer. Administered by BMI.

Written and performed by Sakana Hosomi. From the album “Maju-3″ (XCD-051)

All music by ether. Produced by ether. From the album “Music for Air Raids” (XCD-050)