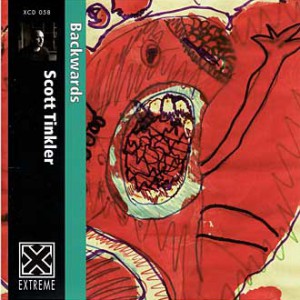 Recorded in one day, mixed in one day and practiced for twenty three years; “Backwards” is an astounding musical journey from one of Australia’s finest trumpet players and jazz improvisers, Scott Tinkler.

Tinkler, winner of the 1996 Australian Jazz award and two ARIAs for best Jazz album, is well known for his many brilliant incarnations as an ensemble player, recording and touring with such groups as The Australian Art Orchestra, Mark Simmonds Freeboppers, The Paul Grabowsky Quintet and The Dale Barlow Quintet as well as with international artists such as Mark Helias, Joe Lovano, Betty Carter, Branford Marsalis, Han Bennink, Billy Harper, Arthur Blythe, Cindy Blackman, Karaikudi R Mani and more.

With these credentials, Tinkler has a lot of ears trained in his direction. Testament to his talent, “Backwards” is a remarkable and demanding outpouring of musical invention.

When Tinkler was asked by Extreme to record a solo album, something way outside his normal group context and his comfort zone, he had no real idea what the result would be.

“I thought I would be able to blast the trumpet with full gusto but sensitivity to the sound and the space needs to be observed. When I played I had no idea how long I was playing for. I was in a dream state, all of my senses were attuned to the music around me,” explained Tinkler.

“Backwards” was recorded with no overdubs, no edits and no processing. It is a real time experience that was documented and mixed to capture the music as Tinkler heard it when he was playing.

The recording process involved a variety of other instruments in the studio at the time. These ranged from a piano, a bass drum, a cymbal to a bucket of water. Tinkler has a few other tricks up his sleeve, taking his trumpet apart and blowing it in ways only he knows how. (Maybe it’s true that he can play backwards!)

“It was an experience that exceeded my expectations. It exhilarated and exhausted me, both emotionally and physically,” Tinkler affirmed.

By playing solo, Tinkler has effectively laid bare his musical identity. Rewardingly, it is a rich and intriguing musical heritage that comes to the fore. “Backwards” brings an exciting creativity to jazz and music fans alike. A new direction for Tinkler has begun with a bang (and a whimper!).