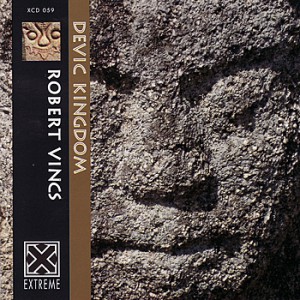 With a remarkable music history, stretching back to the birth of the Fairlight CMI when the sounds he created were used by the likes of Thomas Dolby and Kate Bush, Robert Vincs has continued to evolve as a musician and composer.  Devic Kingdom is a seductive fusion of virtuosic saxophone playing, soaring melody, texture and interactive electronics.

The story of Devic Kingdom begins in 1983 when Robert first encountered the Fairlight Computer Musical Instrument.  Robert had this crazy idea that you might be able to program this instrument to ‘think’ like a jazz musician and in 1987 Robert won the prestigious ‘B.P. Quiet Achiever award’ for his research into music and artificial intelligence.  Ironically this work led to Robert’s interest in the nature of human consciousness particularly the ‘transcendent’ experience and the music of ancient cultures.

Robert Vincs is one of Australia’s most distinctive musicians.  Devic Kingdom draws upon a remarkable sonic palette and his talent as a saxophone player extraordinaire. The majority of the album was recorded on location as single takes at various ‘sacred sites’ scattered throughout the Victorian highlands.  This was done to capture the serene energy of the land and the natural reverberation of the countryside.

Devic Kingdom also includes a variety of other wind instruments, including the Korean Bone Flute and the unique Greenwood leather horn. Scott Dunbabbin contributes to the diversity of sonic texture with his self-designed SDIII Six String upright Bass.  The Fairlight CMI continues to play a part in Robert’s musical expression, especially considering it is still the only digital instrument that can manipulate the amplitude and duration of 32 harmonics in 32 wave segments, by interactively processing selected tracks.  It brings a strangely organic sound and a primitive digital ambience to the music as a whole.

Devic Kingdom is the logical expression of Robert’s diverse influences; culminating in a unique fusion of music genres. Dense interplays of sonic timbre, melody, asynchronous rhythm and the twin flames of human and machine harmonize within the sacred site.  The post-Coltrane era spawns no end of possibilities for new-music in which Devic Kingdom remains accessible and, in moments, exquisitely beautiful.

The music of Devic Kingdom tracks resonances between ancient consciousness and the emergent physics of string theory. At the core of each of these belief systems is the idea that matter arises through vibration. Vibration, driven by intention, creates the world that we know.

Recorded at Kandar studios and on location at various sites throughout the Victorian Central Highlands. Recorded, mixed and produced by Robert Vincs.