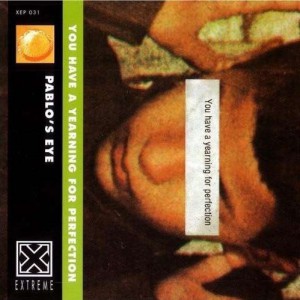 XEP-031 Pablos Eye – You have a Yearning for Perfection

“You Have a Yearning For Perfection” is a sublime new release from PABLO’S EYE. This Belgian collective describe the music as a “temporary atmosphere, like a taste, a dream.” When you hear the music you will know what this means. Critics have been applauding PABLO’S EYE, describing their music as “a provocative puzzle that must be felt”, “deeply unfashionable and deeply brilliant” and “beguiling, constantly shifting music.”

PABLO’S EYE have remixed AMB 7, from “You Love Chinese Food”, and added a new track JACO. JACO is in 2 parts, and combines elements of trip-hop, minimalism and polyrhythmic adventure with that special atmosphere that is unique to PABLO’S EYE. AMB 8 & 9 can succintly be described as ambient, bliss, trance journeys that shift in and out of conciousness.

This an EP release with 45 minutes of music and includes the new version of AMB 7 from the video, soon to be seen on broadcast & cable channels. The video for AMB 7 is a beautiful and remarkable complement to the music.

“You Have a Yearning For Perfection” is an exciting new addition to the phenomonen that is PABLO’S EYE.

Music composed and recorded by PABLO’S EYE in Brussels, Belgium.

AMB 8 & 9 are remixes of AMB 7. The original AMB 7 version appears on album XCD-031 “You Love Chinese Food” by PABLO’S EYE on EXTREME.

Thanks to Paul, Tony Mc, John, Colin & Malka in London.

Dedicated to the celestial harmonies