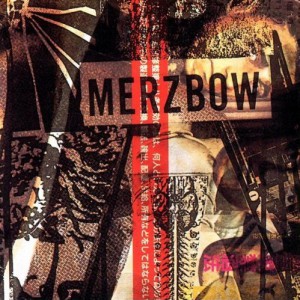 In the very early days of Extreme, as a tape label, selected titles from artists working in the industrial underground were distributed by Extreme. “Age of 369” was one of those cassette releases and continues to be a favourite for all noise enthusiasts.

The lesser known “Chant 2” is also from this period (1984) and complements the sonic intensity of the other. Of further importance is the influence of Maurizio Bianchi (MB) and the mail art that was integral to the industrial underground. These reissues document significant works from Japan’s Noise master.

In 1983, after the release of MERZBOW’s first album “Material Action 2” (Eastern Works Distribution), Reiko A, also involved in the group, did an Interview with Neil HII of S.P.K. in Tokyo for “Fools Mate” magazine. This was a good introduction for us to meet more of the people involved in Industrial Music. We then travelled to Italy and had the opportunity to meet with people working in Industrial Music and Mail Art. I went to Udine and met Piermario Cioni of TRAX, who organised an exhibition of my collage artwork at a small gallery. We recorded 2 tracks at a studio called Atelier de Montage which was owned by Gibson of Tampax, the legendary Pordenone punk band. We also met with other TRAX people, including Vittore Baroni.

This journey was my first and last meeting with Maurizio Bianchi (MB). We had been in mail contact for three years and during this time we had exchanged a lot of Ideas about music: A gift from this meeting was a Russian medical book which included some of the Images which he had used on his “Regal” album. The Interaction with MB was certainly important.

In 1984, MERZBOW recorded tracks for numerous compilation albums and tapes which were linked with the International Industrial Movement. In that same year, I started ZSF PRODUKT and released the premier Industrial compilation tape In Japan called “Sexorama” which included P16D4, Hanatarashi and many others. In that period I had contact with people like John Duncan, Paul Hurst (PRODUKTION). Jupiter Larsen (THE HATERS), Pop ‘n Roll Family, AEON etc. and more people Involved in Mail Art.

MERZBOW did a lot of recordings under the name of MERZBOW LOWEST & ARTS for Mail Art Movements. The concept was to distribute noise with pornography by mail but the Mall Art Movement became more conventional. So, I tried to concentrate more with sound. I found a cheap tape recorder and made a lot of tape loops and manipulated these by hand. “Lowest Music 2” was a very early example of that. Then I mixed more tape loops with more harsh noise. “Age of 369” (Mlroku No Yo) and “Chant 2” are the finest early examples of that. Then I mixed more tape loop sound with harsh electronics. The Japanese title of “Age of 369” was inspired by the Omoto Cult, founded by Onisabura Degughi. The voices of Onisabura also appeared on the “Merzbow + Hanatarashi” collaboration tape (ZSF PRODUKT).

I continued to work on collage noise music. Those works appeared on our second album “Batztoutal with Memorial Gadgets” (RRR). The original tape of the double album Included more works like “Age of 369” and “Chant 2”. Unfortunately, the album was remixed by RRR without these harsh recordings but now it’s re-released as a doubie CD (RRR) and you can find them. The double CD re-release of “Age of 369″ (miroku No Yo) and Chant 2” combines both the music and the Mail Art of this period and is a fitting document of Merzbow In 1984.