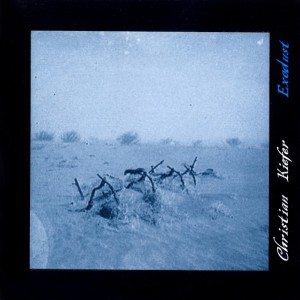 Two famous pieces of the exodusters’ story, Woody Guthrie’s “Dust Bowl Ballads” and John Steinbeck’s “The Grapes of Wrath”, were useful artistic counterpoints to this project and to the project of history.

Last, I must acknowledge the important contribution of Donald Worster’s “Dust Bowl: The Southern Plains in the 1930s”. Worster’s text was my formal introduction to the dust bowl era. If “Exodust” could be considered a soundtrack, it is a soundtrack to his book.

Musically, I am indebted to the work of violinist Paul Zukofsky, and composers Terry Riley and Steve Reich. Gentlemen, I am standing on your shoulders.

Many thanks to Scott Leftridge and David Cooper Orton for their willingness to perform on this project. Roger Richards has been, and continues to be, an ardent supporter of my music. Without his support, this piece would not exist.

This project is dedicated to survivors of the dust bowl, their children, and their grandchildren. Your bravery humbles us all.