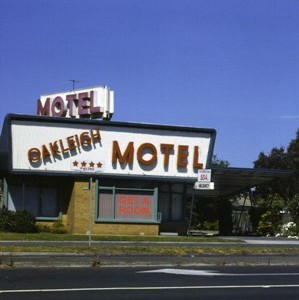 Mr Geoffrey and JD Franzke’s set, “Get a Room”, takes us so far past dance that the beats are like background radiation, like a spooky or wistful afterglow. They go so deep, so low, that it’s close to absolute zero; a chilled zone where even the slightest tremor feels warm enough to melt the vinyl. Down tempo at this degree seems eccentrically cool, drenching its melancholy laid back haze in post-coital blow.

Old school lounge ghosts get blissed on streetscapes made out of ambient, concrete sounds collected from Nepal, Thailand and India (as well as from the sidewalks of late night Melbourne). Tango breaks and sleek sci-fi themes intermingle under the hypnotic coaxing of a seventies self-help guru.

These encounters aren’t as unlikely as they might sound on a track list. But how can you tag the fluency of this type of mix? Mr Geoffrey calls the blend “urban pastoral”.

Cruising a fantasyland of nightclubs, overhearing the action inside. This is more like an expansive atmosphere than a scene. You’re moving through a flow rather than a beat. Let’s also call it “drift” -maybe even as a new style- open to anything that keeps it shifting like a tide from twilight to dawn.