Composed, performed and recorded entirely by Dan Burke, with trumpet by Thymme Jones and vocals by Layna B., GROOVY seeks to attain an inspired amalgam of 70’s disco, space music and acid-jazz. Call it Acid-Disco. Call it Progressive-Space-Disco. Call it the Rebirth of Retro-Cool.

Whatever you want to call it, GROOVY is the result of Dan Burke’s unique musical vision. Dan has a love of all forms of music, particularly dance and experimental music. After being exposed to the ‘brave new wave’ of music in the early 80’s, Burke formed the group ILLUSION OF SAFETY (IOS). Burke has been the leader of the group since its inception, working with 8 other people in various combinations to achieve a prodigious output of releases, including over 10 CDs and over 100 live performances.

Burke continues with IOS to explore the very nature of sound and music, going from beautiful ambient/environmental to harsh power electronics to pseudo-thrash/disco/funk decompositions. Burke has also been creating exciting new projects in the guise of FIXATED, LILYCRUSHER and CUBENSIS, some of them seeing release on Burke’s own label, Complacency.

Thymme Jones has been playing trumpet since he had hair like Brian Wilson. This obviously made him first choice to be involved with GROOVY. Thymme Jones has also been a collaborator in IOS since its beginning. Jones is the founder of progressive rock group CHEER ACCIDENT, releasing 3 CDs on Complacency. Jones also collaborates, on drums, with Jim O’Rourke in Brise Glace and in Yona Kit, with K.K. Null and Jim O’Rourke, both released on Chicago’s Skin Graft label.

Layna B. has appeared live at numerous theatrical performances throughout Chicago. GROOVY is the first time her fantastic voice has been recorded. 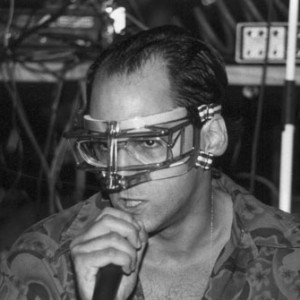