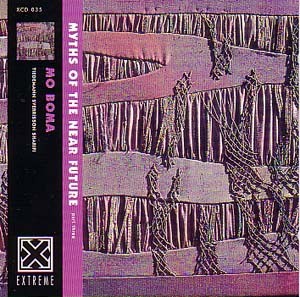 MO BOMA continue their musical journey with “”Myths of the Near Future””, part three. This is the final in a trilogy of releases that meld world music with jazz, ambient with improvisation.

Since the release of “Jijimuge”, their critically acclaimed debut, Carsten Tiedemann spent many months in Africa, continuing to explore the music and culture of the vibrant and diverse countries there. Tiedemann’s travels through Africa, Germany, North and South America, have added to the palette of sounds, instruments and musical possibilities, departing from conventional forms. In addition to this, “Myths of the Near Future” seeks to bring respect and awareness to the music and people that are a catalyst for the eclectic and worldly vision of MO BOMA.

Skuli Sverrisson, originally from Iceland and now living in New York, also an active member of the Allan Holdsworth Band, is a founding member of MO BOMA. Sverrisson plays the electric bass that often underpins the songs. His musicianship shows the jazz origins and adventurous style of the group, where a fretless solo with a shift program will make you think you’re hearing voices or steel drums. Synthesist Jamshied Sharifi, also currently based in New York, has continued his contribution to the group with subtle and astute additions to the soundscape.

“Myths of the Near Future”, part three, takes place in a darker more exotic land. The jungles hide the unknown and the sun decends below the tree tops. Trans-cultural and trans-technological, an instinctive interplay in non-stylised improvisation, creating a music that is both futuristic and organic.

THIS MUSIC IS DEDICATED TO THE MEMORY OF THE PLANTS, ANIMALS, AND INDIGENOUS PEOPLES WHOSE EXTINCTION IS CAUSED BY MAN (NOT WOMAN).

“Myths Of The Near Future” and the names of several titles are works written by J.G. Ballard.

All music by MO BOMA