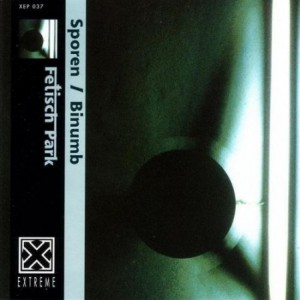 On every release, FETISCH PARK want to do something different. “Sporen” and “Binumb” control the body and move you onto the post-apocalyptic dance floor. It’s a hybrid of manic techno and raw electronics that manages to evoke emotion as the sounds permeate the body.

These two tracks are are linked with “Trost part 8”, from the album “Trost”, which explores sonic narrative and sound research.

Sexuality is something we have in common with other animals. Erotics is the expression of spirit and soul (a privilege of the human race).

Marlon Shy has travelled for many years in Africa, where she spent some time during her childhood, as well as travelling in Thailand, Malaysia, Indonesia, Himalayas and India, where the idea developed for a sound research project involving Indian and German musicians.

All music by Carla Subito.

“Trost: Part 8” appears on the sound research album XCD-037 “Trost” on EXTREME, recorded in the RED SHIELF HOTEL, Bombay, and in Cologne by FETISCH PARK