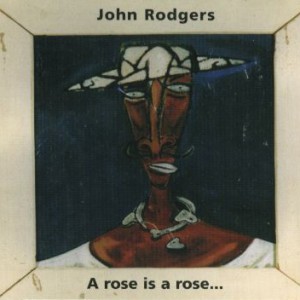 Early in his career, John Rodgers was faced with the tough question of whether to pursue a career as a concert violinist, most likely with the prestigious Berlin Philharmonic Orchestra, or to take his chances in the music world.

John said no to security and comfort and chose adventure and struggle. The overarching reason being he didn’t want to play dead people’s music.

John Rodgers is very much alive and his debut solo release, “A rose is a rose…” is proof that his talent for violin and composition would be wasted playing renditions of Mozart or Stravinsky.

“A rose is a rose…” features John on both violin and piano with fellow musicians Anthony Burr, bass clarinet, Ken Edie, drums, and John Reeves, voice. John composed all of the pieces, with noted collaboritive help by the performers, writing music that challenges the musician as much as the listener.

John also displays his improvisational skills on tracks such as “St Mary’s” and “1/1/94”. This talent is something that has made the performances of the Australian Art Orchestra a joy to behold. His versatility is displayed in a large orchestra setting, in duos and trios and as a solo performer.

“A rose is a rose…” is an accomplished musical statement from a very talented composer and musician. Australia has a new violinist to take note of.

Funding for this recording was provided by the Australia Council.