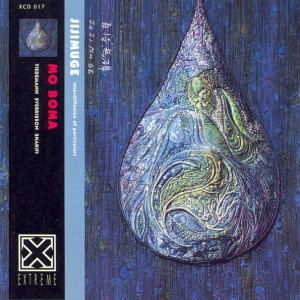 “Jijimuge”, an interdiffusion of particulars, explores the boundaries of world music as it evolves into our own culture. The musical roots of Central and West Africa, Indonesia and South India, and the many musical styles of western society combine to form eclectic hybrid creations in rhythm and harmony. “Jijimuge” is eight songs of contemporary lucid dreaming.

MO BOMA, the entity named after a pygmy girl’s lullaby, is a transatlantic collaboration bringing together three talented musicians. Carsten Tiedemann, from Germany, claiming to be one of the tallest pygmies, has lived in many countries, all the while listening to and absorbing the music of these distant lands. Skuli Sverrisson, originally from Iceland and now living in New York, is already renowned in the jazz field for his musicianship, having been in FULL CIRCLE and now with the Allan Holdsworth Band. Synthesist Jamshied Sharifi is already credited with many international projects, of note with Michael Gibbs, and is currently based in New York.

The group started in 1989 when Tiedemann and Sverrisson discovered their instinctive interplay in non-stylised improvisation. Sharifi joined in 1990 and brought new ideas with the same clear vision.

“Jijimuge” was realised when Jon Hassell introduced EXTREME to the music of MO BOMA. MO BOMA and EXTREME are both approaching music with similar ideas of change and innovation. It is only fitting that Jon Hassell, himself a leader in new music, should be the conduit for this exciting debut release.

All music by MO BOMA.

Recorded at Chateau des Rotoirs, France, and Erlangen, Germany, during the summer of 1991. For Chris and Klaus Tiedemann.

Thanks to Rick Geiger, Stephen Maid and Jon Hassell.