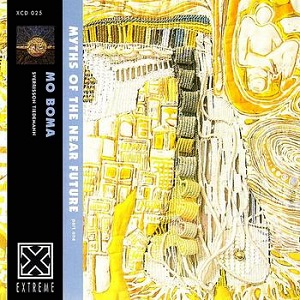 MO BOMA return with a startling musical statement. “Myths of the Near Future”, part one, is the first in a trilogy of releases that meld world music with elements of jazz and experimental rock, ambient jungles with space age funk, first impressions with hairsplitting recomposition – coherent, holistic, mature and passionate.

Since the release of “Jijimuge”, their critically acclaimed debut, Carsten Tiedemann has spent many months in Africa, continuing to explore the music and culture of the vibrant and diverse countries there. Tiedemann, in this time, has also produced and played on the “Big Waves” album with Robert Rutman, an album offering spectacular sound and transparency, where bow chimes cascade between orchestral sounds.

MO BOMA’s continuing instrumental work and development has broadened the orchestrations and added new textures and voices while retaining the intimacy and group sound which made “”Jijimuge”” a landmark in contemporary lucid dreaming. In addition to this, “Myths of the Near Future” seeks to bring respect and awareness to the music and people that are a catalyst for the eclectic, worldly vision of MO BOMA.

Skuli Sverrisson, originally from Iceland and now living in New York, has been touring the world with the Allan Holdsworth Band and is a founding member of MO BOMA. Sverrisson’s mastery of six string, fretless and baritone basses, with carefully applied electronics, often shapes the lead voice and treble registers, while his low end provides warmth, punch and creative musicianship, further emphasised by his cathedral-like chord work. Synthesist Jamshied Sharifi, also currently based in New York, has continued his contribution to the group as master player and sound designer with subtle and astute additions to the soundscape.

There is a seamless quality to the music of MO BOMA, trancelike but earthen and at times irresistibly funky. “Myths of the Near Future”, part one, recorded in Africa, Germany and New York, shows the unique voice of a group developing beyond “Jijimuge” without departing their musical identity.

Trans-cultural and trans-technological, instinctively improvised archetypes beyond known forms, MO BOMA creates music that is both futuristic and organic.

This recording was produced using RSP Technologies’ Circle Surround? system. MO BOMA is the first group in the world to use the Circle Surround system in a recording. Circle Surround, previously known as Circle Sound, is the first system designed specifically for the production and reproduction of music in surround, in that it allows for full bandwidth of the rear speakers, in stereo, and provides dramatic channel separation within a multi-speaker surround environment. Circle Surround, drawing dimensional information through its unique steering technology alone, without changing the original sound, is used as a textural tool, a matrix through which ambience and processed sounds are able to function and breathe in ways previously impossible within conventional recording mediums. Circle Surround creates a dramatically expanded and enhanced soundscape, and in doing so welcomes the listener to a new audio world, as does the music of MO BOMA.

This music is dedicated to the memory of the plants, animals, and indigenous peoples whose extinction is caused by man (not woman).

All music by MO BOMA.