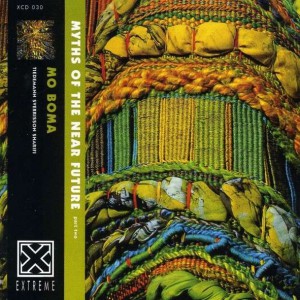 Inside a red hot melting pot, MO BOMA creates a gleaming alchemy – the sparkle of brass and copper, the profoundness of ebony, the glimmer of quartz and freshness of ceramics, intermix between the waves of an electric plasma with the force of sheer lightning.

Principal composer – Carsten Tiedemann, works the multiple paths of percussion, passing through Africa, Indonesia and India. Juggling the materials and sonorities, he stakes out the most jubilant rhythmic avenues, traced with exaltation and mastery inside an affluent jungle, amidst the fluorescent contours emitted by the fulminous guitars.

Expert in the inter-marriage of the bass guitar with the electronic world, Skuli Sverrisson shatters these landscapes with seismic buzzing and whirring and infrasonic pulses. Continually pushing the edifice forward, his profound groove has the magnitude of trembling earth and liquid power of the large rivers carrying their brown waters through Africa.

Illuminating the ensemble, Jamshied Sharifi, pulls from his keyboards, cloudy streams which shine between the mountain masses and lets electrified halos dance in an environment saturated with deep aromas.

In this album, MO BOMA magnificently diffuses their fold geographies and visionary architectures. There, Hassell’s Fourth World, the tectonic eruptions of Christian Vander and the spiralling marches of Weather Report cross each other. In less than 50 minutes, “MYTHS OF THE NEAR FUTURE” part two, offers 12 solar dances which make the heart beat in phase with that of the planet, projecting the spirit into the cosmos.”

THIS MUSIC IS DEDICATED TO THE MEMORY OF THE PLANTS, ANIMALS, AND INDIGENOUS PEOPLES WHOSE EXTINCTION IS CAUSED BY MAN (NOT WOMAN).

“Myths Of The Near Future” and “The Day Of Creation” are titles of works written by J.G. Ballard.

Thanks to Werner Gierig, Tota and Miyuki (N.Y.), Chris and Klaus, Christian Eberhard and Roger Richards.

All Music by MO BOMA.